I just read this amazing book about Joseph Lister, a 19th century Quaker surgeon who revolutionized medicine, studying and perfecting the process of asepsis, which keeps bacteria from taking root. Before Lister’s methods were implemented and popularized, getting surgery was a game of chance, with poor odds. An enormous population of post-surgical patients died from sepsis or post-operative infection, so even if the initial ailment didn’t kill them, the surgery often did.

Things of note about Joseph Lister: His Quaker faith held a strong principle of doing good for mankind, accolades were a distant second. A questing mind kept his curiosity and rigor in testing his methods sharp. His goal did not waver. Over decades of his professional notebooks, the first and last entries deal with the issue of sepsis and post-operative infection, showing that he was always striving for more understanding. His friends and colleagues that he associated with were of a similar mindset (such as Louis Pasteur, who provided the framework for Lister developing his theory). And if a patient needed assistance after surgery, even in life circumstances, Lister did his best to help. He was known as a keen teacher. Whenever the occasion presented itself, he did his best to spread the Lister method and create converts. Who could count the number of lives saved? When vision, intellect, and a strong moral imperative are united, great work can be achieved.

In The Butchering Art: Joseph Lister’s Quest to Transform the Grisly World of Victorian Medicine, Lindsey Fitzharris shows us what character combined with purpose can be. So much of our lives tend to float us from one happening to the next. How can we contribute to something greater than ourselves? A common question that many people ask at the end of their lives is “will I be remembered?” Let’s make that easier to answer.

Not all of us may know what we may yet become, but what are you passionate about? What could you prioritize? What is the framework in which you live your life, and are you staying true to the goal? Not all of us will change medicine, but your life has worth. There is something out there that only you can do. As the line from Mary Oliver’s oft-quoted poem The Summer Day goes, “Tell me, what is it you plan to do with your with your one wild and precious life?” 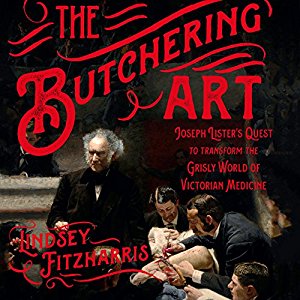 Speaking of the last post, I’ve decided to perhaps not let go, but to move on. My website domain has switched over to lathe.yoga, and if there are any mysteries here in pronunciation, Lathe rhymes with faith. Over time, I will phase out of the other kaphayogi domain name, but it will probably take a couple of months to make the transition complete.

Why did I decide to change my domain name? I want to be a little easier to find, and to simplify the web address. So, there is a redirect for a while, but at some point, bookmark lathe.yoga in your browser, or subscribe to the blog here.